It didn’t matter how fast she ran; there was no escaping the truth. The freezing December rain hit her thighs making them red above the knee where the black lycra stopped. Her black hoody wet darker at the front and across the shoulders. Running against the wind and rain regenerated her. The sound of water drops hitting her ears and face reminding her of long walks on Sundays before sitting down to a roast dinner.
She pulled into the road but ran past the front gate. Through the windows, behind net curtains, neighbours watched her. It had been four months since they found Mr and Mrs Cacroft. Their only daughter, Sarah, always liked to run but now they noticed that she wouldn’t come straight back, adding another run of the block, sometimes two or three before returning home.
Sarah Cacroft pounded the paved streets back around on to Westbury Ave and then back on to Mannock Road. This time she ran through the open gate, up the path and onto the black and white tiled porch, pushing through the Georgian door and letting it close noisily behind her.
Moving swiftly and seeming not to notice the small tower of unopened letters stood on the white wooden shelf, she let herself into her downstairs flat. Her neighbour had set the post for her, neatly, under the broken fuse-board cupboard. Small particles of dust blew off the top of them as the inner door slammed behind her.
Jogging down the hallway into the bathroom, she pulled a towel off the rail and wrapped it around her neck to slow the cold rain dribbling down her back and turned on the shower. It chugged and spluttered into action. Waiting for the water to get to temperature, she pulled the fridge open and stare at the shelves. Standing there for a while before taking out the orange juice and pouring herself a glass. Drinking half before getting in the shower, she set the rest on the bathroom sink as she stepped in.
The water didn’t register at first, her skin was so cold. Her face, legs and shoulders stung as the hot water ran over them, pushing into the raw coldness of her bones. After her shower she stepped into her fleecy onesie and settled down on the sofa to enjoy her day off. She looked at the pile of paperwork.
Letters to her parents. She’d opened them, thrown away the envelopes and laid them, smoothing each piece of paper out, making them as level as possible in piles on the table. Each correspondence was painful. A reminder of how alone she was. Decided she couldn’t, but promising herself she’d look at it again tomorrow she picked up her laptop and signed into Facebook. It was mid-morning and she meant to just stay on for a few hours.

It was early evening when upstairs’ doorbell made her realize she hadn’t moved all day. Listening as someone stirred in the flat upstairs, she heard them come down to answer the door and the polite exchange on the doorstep as her neighbour took delivery of a takeaway. Sighing, she stood up and stretched.
Pulling her uniform out of the washing machine and placing it out to dry, she busied herself tweezing her eyebrows while the dinner cooked. Putting the cooked fishfingers in a sandwich along with rocket and mayonnaise she carried it through from the kitchen and ate it sitting on the sofa, watching the tv. Sarah eyed her last bud and although she couldn’t afford more, decided she needed it and making herself a large joint she fell asleep.
It was gone midnight when she woke, aching and cold. She forced her stiff body off the sofa. brushed her teeth and slid into bed. The rest of her sleep was undisturbed until the alarm sounded, waking her for work.
Brushing her mostly brown hair upwards, and holding it firmly with one hand, she grabbed a hair band and twisted it into a ponytail. She drew eyeliner across her eye whilst checking the mirror and added some blusher to her cheeks. Stopping briefly, she reached across the table and switched on the radio. The music drowned out the sound coming through the window.

Sarah would have freely admitted to anyone, that occasionally she enjoyed escort work – but then occasionally most people do, regardless of what they did for a living. As a job, it was like any other in that respect. As a prostitute, she had to take the rough with the smooth generally but there were unwritten rules and guidelines designed to keep them safe.
Her clients this evening, John Smith and Kevin Hargreaves, one known and the other unknown but apparently trusted were still strangers. Sarah knew Kevin was well off, as were many of her clients. He was married with two children. She assumed his libido and his wife’s were now mismatched. Charging £150 for the hour she’d meet with John, clean up and then Ted would drive her to Kevin who’d provisionally booked her for a two-hour slot.
Escorting was solitary, strange work that suited her. It was a job that someone ‘willing’ could earn decent money. It was work she could organize around the nursing and studying. It made sense to save for next year’s books, equipment and living costs. The escorting was a win-win situation. The rent on her flat in Turnpike Lane was ridiculously high. Trying to save for next year, on her student nurse salary, wasn’t possible.
Since losing her parents it was important to focus on a target in the future. It was so easy to think there is nothing to live for, nothing to strive for, no one to please or disappoint. There were many things she wanted to do and felt that she could. Her hand went up to the necklace at her throat, a reminder of her mother.
Since deciding to study medicine Sarah learnt how to bury the grief. She’d also seen how appallingly the national healthcare system worked from the inside. She’d suspected her parents died unnecessarily young but was told by their doctor that it had been what they had wanted. Data protection hadn’t allowed the doctors to tell their only daughter that they had verbally expressed a desire to end their own lives.
Remembering how much anger she’d felt that they’d been left without emotional protection, Sarah felt that patients diagnosed with terminal conditions should be given more support. It is a secret ambition of hers to help change the way mental health patients are managed. Most people with ‘end of life conditions’ feel depressed, they need help and support with this part of the illness but are often ignored or given inappropriate antidepressants.
Becoming a nurse was her way of doing something positive after the tragic event – this event that was out of her control. Finding her parents, dead, cuddled together, was devastating. Not able to look after themselves or each other and especially not wanting to be a burden on Sarah, they had taken their own lives.
The shock of finding them had put a white streak in the front of her hair in the nightmare filled days that followed. She looked at it in the mirror now. It looked like she had employed a talented colorist to add an expensive block of drama. Sarah toyed with the streak of white hair, her mood saddening.
The phone bleeped, reading the screen, She straightened up and grabbing her briefcase and keys, left her flat. She quietly made her way to where Ted was waiting around the corner.

This is the first chapter of Revenge is Best Served Cold by myself under my real name of Sam J Harris. I will publish the next chapter, already written, next Monday until the book is published.

It is the first novel of The Snap Trilogy.

All characters and interactions are fictional. 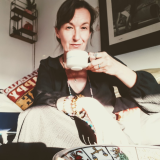